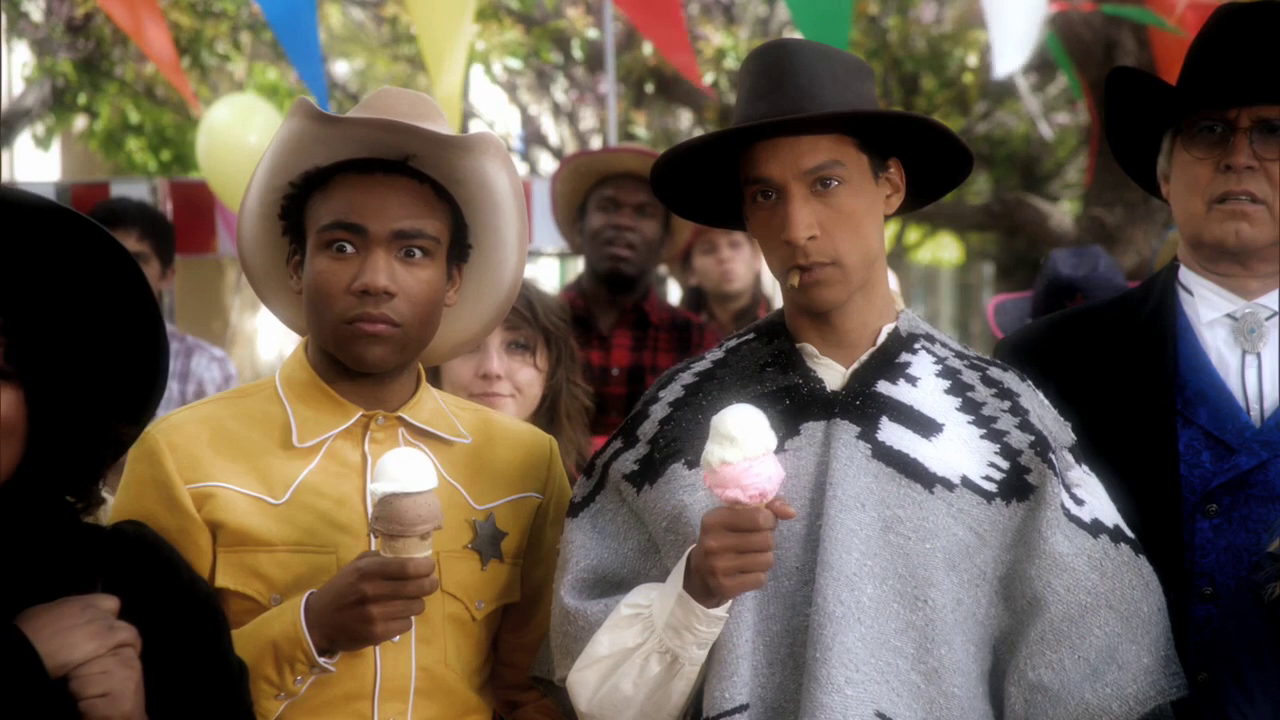 This is a music video edit of bits from the 4 paintball episodes of Community (up through season 4):

Community is one of my all-time favorite shows. The production process of this video is unlike any other I’ve done. For my first Community Paintball video, A Vid Full Of Paintballs, I’d started working on the edit in late 2011, and got roughly 20% of the editing timeline put together. I then got distracted with other things and hadn’t gotten back to it. I resumed work on it in early October, 2012, and eventually got it posted on my birthday, October 13, 2012. As is often the case, I like to do a second follow-up video primarily because I’ve gone through all the work of assembling the materials and organizing it. For the initial video, it’s typically a mix of wanting to do a certain video and hearing a song that makes it possible. For these follow-up videos, I already know the material backward and forward and wait until I come across another piece of music that’ll work.  Also like other videos that I’ve done a follow-up to, I think I might like this second effort better.

But the big difference for this video that I was mentioning above is the rate at which it was assembled. The first took more than a year, but that was mostly time where I wasn’t working on it. For this one, I decided to do no more than 10-15 minutes at a shot. I did that once every week or so for more than a year. As a result of this process, I had the unique problem of having to constantly keep removing duplicate clips from the video. My final pass at watching it was to specifically watch out for any clips that appeared more than once. One thing I was able to include in this second video is material from the fourth season finale, which included some paintball material. That episode didn’t exist when I made the first video.

As is often the case with these videos, I decide to make it a final version when I can watch it and not be highly annoyed by anything enough make myself fix it. That isn’t to say that there aren’t things I’d want to fix, but that I can make it through it without the compulsion to fix it. As the saying goes with movies: they aren’t finished; they escape. Since I managed to make it through watching it 3 or 4 times and was OK enough with it to not immediately tinker with something, and the fact that it was a notable day (Christmas), I decided to declare it final.

My least favorite section of this video is probably the middle third. My favorite section is the last handful of clips. That last section is something I had locked down very early in the process, and liked all the way up to the end. That’s not unusual for my typical process of doing these. I’ll typically have a couple stretches of the video that I like and barely touch again, then one or two sections that I have to constantly keep tweaking and never end up completely liking.

Music is by Immediate Music (a specialty company that writes music for trailers and commercials) called Spiritus Omnia, from their Trailerhead album.

Here are a few edit stats about the video:

Total number of edits: 134
Number of edits by me: 102
Remaining number of edits (original episode edits within clips between my edits): 32
Average edit length: 1.075 seconds (not quite my quickest edit-per-second rate – which would go to the first paintball video)

A simple compilation edit of all the gag reels from Friends.

A music video edit of various explosions from movies set to Tchaikovsky's 1812 Overture.

This is a music video editing together footage from Firefly & Serenity to "Sarabande Suite (Aeternae)" by Globus.
Under Construction

What’s another word for thesaurus?