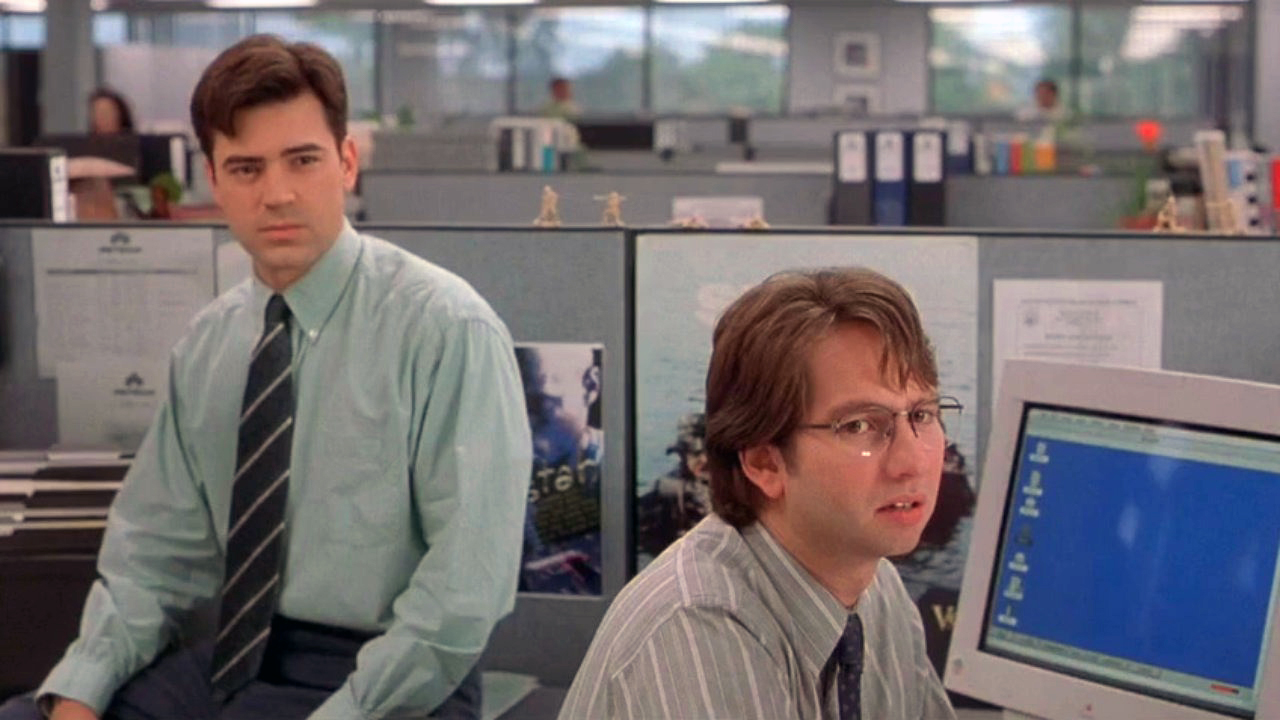 The very definition of an unassuming and casual comedy that hits the target with relative perfection. And few comedies are so appropriately quotable in day-to-day activities. The cast is great, but it’s a couple of the supporting performances that have so prominently associated the actors to the general public: that of Gary Cole as the droning boss, Bill Lumbergh, and that of Stephen Root as red Swingline stapler user Milton Waddams. I’ve seen this movie dozens of times, and I’m sure I’ll see is dozens of more times, barring fatal near-future accident.

Excuse me, but I think you have my stapler.

I’m a long-time MSTie (fan of Mystery Science Theater 3000), and have been so since the middle of its first year on the Comedy Channel (later Comedy Central). This feature film was released between seasons 6 & 7 of the series by Gramercy & Universal. Well, it was kinda released, in a whopping 26 theaters. Frankly, it’s one of my favorite MST3K productions and holds its own against the best episodes of the series. I’ve watched this a pretty good number of times and quote a pretty good number of lines from it, regardless of whether people know what I’m quoting from or not.

This Island Earth can be yours IF the price is right!

When you say Farrely brothers, most people think of There’s Something About Mary or Dumb & Dumber. While I’m a fan of those movies, Dumb & Dumber in particular (also on this list), the first movie my brain goes to is Kingpin. It’s an underrated gem of a comedy. The script is one of those unusual silly comedies that kind of buys into its own plot, even at its most ridiculous. The true highlight of this one is the cast. Woody Harrelson and Randy Quaid play off each other well in the lead roles. Vanessa Angel, an underappreciated actress that was seemingly only ever cast for her looks, plays the romantic lead nicely. But the true star of the show is Bill Murray, who steps in an steals the show in his handful of scenes.

WHO YOU CALLIN’ A PSYCHO?

You know, even though we’ve watched Pretty Woman like thirty-six times, I never get tired of making fun of it.

While this movie didn’t do particularly well on its theatrical release, it has gained its proper attention in the years since. There are examples of perfect casting in movies over the years, and then there’s Jeff Bridges in this movie. I challenge you to come up with a better example of casting. Having John Goodman and Steve Buscemi backing him up certainly doesn’t hurt. And the icing on the cake is Sam Elliot as the on-and-off-screen narrator. The Coen brothers tweak their oddball sense of humor to full potential and create some amazing characters and tons of quotable dialog.

That rug really tied the room together.

A wonderfully odd tonal mix with a great central setup and a wonderful cast, all led by a talented director – Alexander Payne. It’s a wonderfully dark, subversive movie that loves to take left turns and cross lines. While I know she spent a little while escaping the type casting, Reese Witherspoon will always be Tracy Flick to me. It’s a perfect performance. Literally 100% flawlessly perfect. Nobody could possibly have been better cast in the role. The rest of the cast is fantastic, too. The local filming that Payne did in Omaha lends a lot to the film as well.

What’s this? Another underappreciated and all-but-forgotten Bill Murray movie? Yeah, that seems to be a feature of this list of mine. Murray co-directed this one (his only film directing credit). I had a little trouble deciding which list to put movies like this and LA Story on (I saved LA Story for the romantic comedy list, but decided to put this one here, though it probably could have gone either way). Murray is practically showing off in his performance in this movie, making it all seem downright easy – which is rather in character for his role. Geena Davis and Randy Quaid round out the main trio of the cast very well. And Tony Shalhoub gets a wonderful early role as a non-English-speaking cabbie (before he would go on to his down-on-his-luck cabbie role on the series Wings). If you haven’t seen this one, give it a shot. Unfortunately, very few people ever saw it.

It’s bad luck just SEEING a thing like that!

I could have also featured the sequel to this wonderful Top Gun parody on this list, but it barely got bumped to the runner-up list. That one does an excellent job making fun of the Rambo franchise. This one does a spot-on parody of Top Gun. Charlie Sheen may be a crazy party animal in real life, but it’s hard to deny his skill at roles like he had in the Hot Shot movies (and 1994’s The Chase – which will definitely be on my future list of top action films of the ’90s). Jim Abrahams, who got his start as part of the “ZAZ” writing/directing team with David & Jerry Zucker did an excellent job helming the Hot Shots films, slipping them easily in the ranks with the likes of his previous parodies like Airplane. And a small, fun tidbit – Sheen co-starred in this film with future Two & A Half Men co-star Jon Cryer. Rounding out the cast are excellent choices like Cary Elwes, Kevin Dunn and the real scene-stealer, Lloyd Bridges, who really throws caution to the wind.

I slipped on a crab. Who put that crab there?

I suppose I don’t really need to comment on this one much. It’s one of the obvious ones to put on the list. One which many people would probably include on their best comedies of the ’90s lists. It’s full of tons of great material, and has proven to be quite useful for quotable dialog over the years.

We got no food, we got no jobs… our PETS’ HEADS ARE FALLING OFF!

This is another one that could easily fit in a number of genre lists. I chose to put it here on the comedy list because, well, I consider it a hilarious movie. It’s probably my favorite Johnny Depp performance, and the rest of the cast is fantastic. But the real star of the film is director Terry Gilliam’s bravely wild style and out-there choices. It’s only fitting for a Hunter S. Thompson story to go as wild and inane as the story will permit.

We can’t stop here; this is bat country!

When I can’t think of something to write, I often don’t write anything. And then I pretend it’s a style.