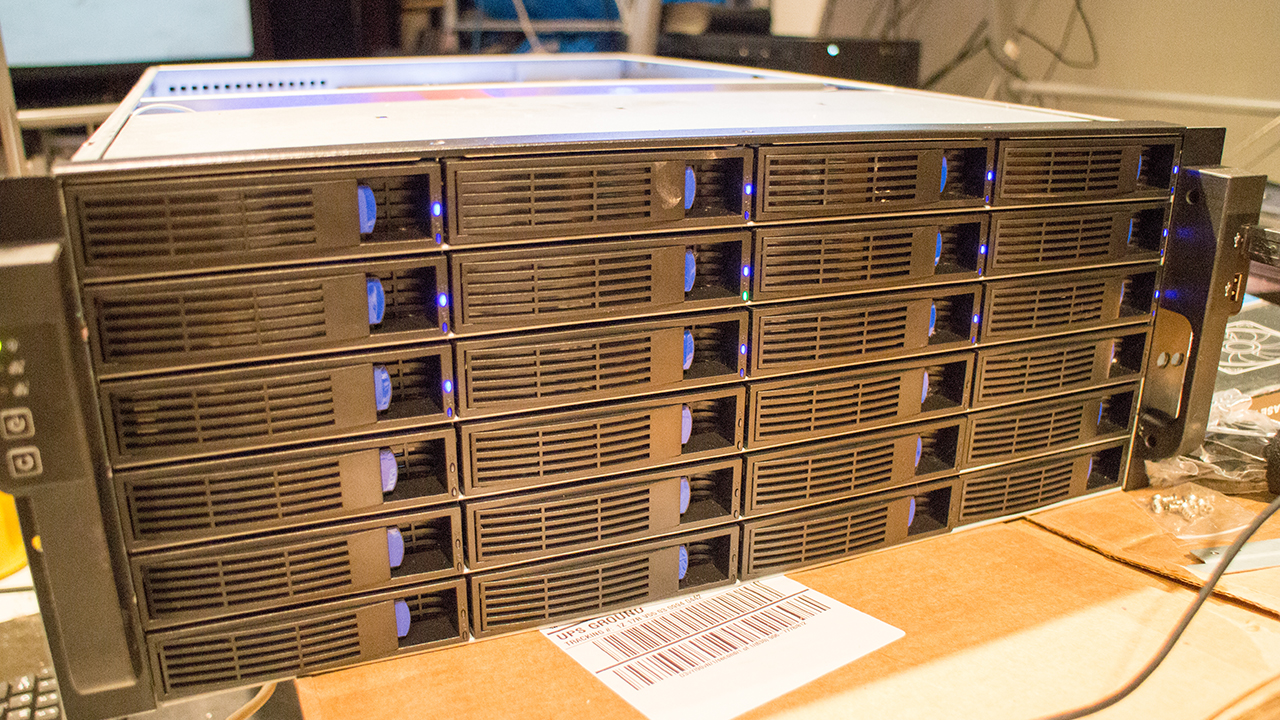 This post is gonna be about the upgrades I made to my unRAID storage server today. If you want to know about my original build, or what unRAID is and what I use it for, you can look at my first post and/or my follow-up to that post, both from a little more than a couple years ago.

For the record, I’ve had a great experience and track record with the hardware from that first build. A couple months ago I made the jump from version 4.7 to the new version 5 major release, which was in the works for a VERY long time (since not long after I finished that first build). One of the big advantages of making that upgrade was being able to use drives larger than 2 terabytes. The way unRAID works is that the parity drive has to be as large or larger than any other drive in the array. I had delayed in adding any drives to the existing hardware for a few reasons. One of which was that I knew version 5 added support to be able to use things like 4tb size drives. Another reason was that I would have to make some decent hardware changes and the addition of a $100 drive backplane array unit.

I’ve hung around the unRAID forums quite a bit, and have always wanted to use one of Norco’s rackmount storage server cases with tons of hot-swap type trays and nice backplane support. I decided that the one toy I would get with part of my tax refund was one of the Norco cases. After deciding to do that, I decided to get a replacement set of motherboard, CPU and power supply. I needed the different motherboard (and CPU as a result of that switch) so that I had enough interface slot support to add another controller card, which would actually allow me to support all 24 drive bays on the case. The motherboard I ended up going with has 8 SATA3 ports. Then there are two PCIe x16 slots (well, one runs at x4 speed, which is just enough for what I need). I already had one SuperMicro controller card that has two Mini SAS 8087 ports, each of which handles 4 drives (so the controller card handles 8 drives). With this motherboard, I will be able to down the road get a second one of those cards to add support for those last 8 drives.

The Norco case I went with is their 4224 model, which is their biggest and newest model. The power supply that I upgraded to is Corsair’s CX750M, which is a fantastic modular PSU with a healthy amount of power. I was using a CX500 previously, which might have handled things in the new case, but I didn’t want to push my luck. Plus, I’d gotten a great deal after rebate on the PSU. And as I’ve said before, I’m fiercely loyal to Corsair (more than pretty much any other tech brand of any kind). The motherboard that I went with was Biostar’s A85W. The CPU I went with is an AMD A6-5400, which is essentially overkill for what unRAID will utilize. But, it was about as good a price that I got compared to what a wimpier one would have cost anyway.

I had to get a full set of cables, as my previous ones wouldn’t work in the new configuration (you don’t want me to explain the difference between forward and reverse breakout cables). Another thing I saw from many people was that the volume of the 4 backplane 80mm fans that are in a row on the metal panel inside the case was loud. There’s a replacement metal panel that changes it to use 3 120mm fans, which can push a good amount of air with much lower volume. I got a nice deal on some white LED Rosewill 120mm fans from NewEgg ($5 fans down to $3, with a limit of 5 – so I got 5 to have 2 spares).

It was a bit of a process getting all the new stuff installed in the groovy new case. I’ll say one thing – they REALLY play it tight with how that ATX motherboard fit into the case. I mean, it’s unbelievably close. I’ve never seen such a close fit (you can see it in one of the photos I took of the corner of the motherboard in the case). Either I got lucky, or they are more precisely specific about the ATX size spec than I would have assumed. The side of the panel on which I mounted the 120mm fans ended up being a really stupid choice. So, having gotten most things wired and routed through holes on said panel, I ended up having to disconnect a number of them and unscrew the panel to unscrew the three 120mm fans from it and mount them on the other side. That was essentially my one problem with the whole process, so if that’s my worst problem with this big a change, I have absolutely zero reasons to complain. It actually went remarkably smoothly. It took quite a bit of time to carefully move each of the 12 drives, verifying their order in the bays (via checking and double checking the serial numbers of each). Had to unscrew 4 mount screws from half of the 12 drives, then put 4 screws into each of all 12 to get them into their drive trays in the new case. Not hard, just long and tedious to do.

I don’t have a server rack at the house to put the new case in, but cases like that only come in rack mount configurations. But, the super-strong shelf I had the old server on seemed like it would be about the right size on which to set a big rack mount server case. Once I got the upgrades tested, I moved it to the shelf and hooked it up there. It ended up fitting almost perfectly – better even than I thought it would. Overall, a great upgrade process success. And now I’ve got TONS of room to expand on it, and it’s a total piece of cake to do so. Plus, my power and cooling of all the drives are now considerably easier. The Norco is a very nice case for a budget price point. It’s a fraction of the cost of more mainstream, large 4U size server cases (things like a SuperMicro case, etc). Plus, it’s standard old ATX so it takes consumer level hardware like motherboards and power supplies. Below is a gallery of pictures I took during the process as well as a handful of brief videos of it in action.

My idiotic experience of being blacklisted by Comcast for a year back in 2008.

So, after a few weeks of glitchy behavior from my old Windows 2003 server at…